Storms brewing on the Atlantic

A new chapter unfolds. Click on the link above
Posted by This bored looking guy at 12:00 PM No comments: Links to this post

" Peter van Kets's talk to our management was both professional and
inspirational. His appropriate messages were delivered with
credibility,genuineness and a wonderfully humorous and personal touch. By all
accounts, he is an example of someone who has set out and achieved
stretched goals - overcoming adversity on many levels. Our management team
loved his presentation"

BANISHING self-pity and turning on the pace through the worst conditions was the formula which took East London duo Peter van Kets and Bill Godfrey to victory in the 2008 Woodvale trans- Atlantic rowing race – arguably the toughest endurance race of them all.

Speaking recently at a packed motivational business breakfast in aid of Cheshire Homes, Van Kets described how he met Godfrey, a project manager for a civil engineering firm, while surfing one day.

In the same conversation, “sitting on our surfboards behind back line”, Godfrey revealed his dream of conquering the Woodvale – and suggested they do the race together.

A qualified teacher with a small property business, Van Kets was not a rower but was a seasoned canoeist, open ocean yachtsman and adventure race competitor, and was the recipient of last year‘s Eastern Cape sports star of the year Award.

One of the duo‘s fortes was that they had complete faith in Godfrey‘s rowing abilities and in his own sailing experience and capacity to weather the physical and mental challenges they would face, he said.

One of the things that makes the race so tough, however, is that teams have to be completely self-sufficient. Food, water, medical aid and emergency rescue gear – including an axe to break them out the hull if they are trapped beneath a capsized boat – all have to be carried on board. They knew the race was going to be more difficult than anything they had done before.

Their 2½ years of training included extensive mental preparation with top sports scientist Prof Tim Noakes. Their intention from the start was to win the race and break the 40 days and five hours world record held by an Australian team.

Having just scraped together sufficient sponsorship, they launched on December 2 last year with 22 other boats from the Canary Islands, off West Africa, for their 5438km journey – backwards – over the Atlantic. Their 7,1 metre vessel was called Gquma – a isiXhosa word which can mean the roar of the lion, the sound of thunder or the slap of a wave.

Rowing an average 3,6km/h, they alternated with each other on 90-minute shifts through 24-hour cycles, listening for dangerous “growlers” and “slappers” at night, and celebrating each sunrise with a call on their satellite phone to their families.

Van Kets said they had experienced incredible contacts with nature.

“We saw glowing green phosphorus as thick as syrup on the water at night ... we were followed by sharks and dived with dolphins and whales ... the albatrosses flew alongside us almost close enough to touch.”

They spent their off-duty times lying in the coffin-like hatch. As part of their mental disciplining regime, at the end of each shift, the rower was required to call to the sleeper: “Hey bru, you won‘t believe it but we‘re 90 minutes closer to Antigua.” To which the awakened sleeper was required to call, no matter how awful he was feeling, “yahoo!”

Their physical travails included multiple layers of blisters on hands and bottoms, seasickness, tendonitis that made it impossible to grip the oars, sunburn, exhaustion and loss of all body fat, which made every knock of the oars excruciating. Van Kets lost 12kg during the race.

With their continuous exertion and temperatures ranging between 30 and 40°C, they sweated profusely and drank on average 30 litres of water a day.

One of their most crucial pieces of equipment for this reason was a water desalinator which was used to make salt water drinkable. The little machine was powered by solar panels installed on the boat, which also powered the compass and GPS.

One of the ways they beat their tough as teak competitors, who came from five other countries, was how they managed the bad times, he said.

“We decided from the start we would look after each other and forget about self-pity. That was our winning formula.”

Their decision to row through the night as well as the day, and changing their ablution regime, were two other winning factors, he said.

“Each time one of us needed to pee over the side the other had to stop rowing because of the movement of the boat. We estimated we were losing three nautical miles (6km) a day. We changed to peeing into a bottle which was then emptied overboard. In the end, the second- placed boat came in just six hours or 25 nautical miles (46km) behind us, so that little change made a big difference.”

They went through four storms and used them to get an advantage over competitors.

Posted by Mike Hendrikse at 5:09 PM No comments: Links to this post

Peter blows the Storm away

In a recent presentation Peter van Kets blew Cape Storm away with his "Lessons Learnt" presentation. The timeless story of conquering the treacherous Atlantic Ocean left the crowd in awe. At the end of the session, Peter was met with a standing ovation.

Ian, Managing Director of Cape Storm, Cape Town, had this to say about Peter:

"The film was awesome and it was an inspiring evening. The first time we’ve had a standing ovation at the end of a presentation!"
Peter is currently in Cape Town as he prepares for a tour around the country and his Prize-giving ceremony in the UK at the end of June.

Well done Peter on this great South African achievement.
Posted by This bored looking guy at 8:31 AM No comments: Links to this post 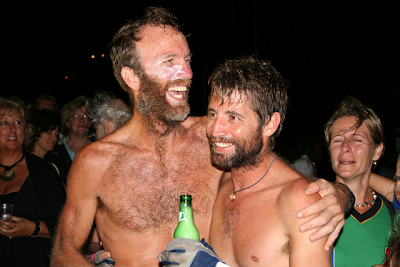 On 2 December 2007, the Woodvale Atlantic Rowing Race started in La Gomera, Canary Islands with Peter van Kets and fellow adventurer Bill Godfrey setting out to row across the Atlantic Ocean to Antigua in the Caribbean. A distance of 5000km, using nothing but their own strength to power their boats in this gruelling adventure.

Their story is one of incredible guts and determination, of focusing on goals no matter what the odds and of triumph when they won the race in the pairs division.

Peter van Kets relates this incredible story in his talk "Lessons Learnt". This heart to heart talk is filled with emotion, challenges and incredible fervour.

To Book Peter as a motivational speaker contact Mike Hendrikse mike@creativeimpact.co.za or 0027 823763194

Posted by Mike Hendrikse at 10:50 AM No comments: Links to this post

Rowing across the atlantic 2

Orchids and Onions - what do you think?

Motivational speaking at its best!

Peter van Kets and Bill Godfrey tackled the Woodvale Atlantic Challenge. Two men and the ocean in a rowing boat unsupported, attempting to cross an ocean. Peter relates their story to corporates in an amazing talk called "lessons learnt". His story is one of incredible guts and determination, of focusing on goals no matter what the odds and of triumph when they win the race in the pairs division.

This heart to heart talk is filled with emotion, challenges and incredible fervor. Excellent motivation for sports teams, companies and individuals alike!

To book Peter for a talk contact Mike Hendrikse mike@creativeimpact.co.za or 0027823763194